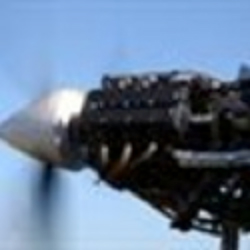 In addition to normal unleaded petrol (MOGAS), with an octane rating as low as 91, or standard aviation fuel (AVGAS), the ADEPT 320T engine can operate on more environmentally friendly alternatives like bio fuel and Ethanol blends.

The unique, liquid-cooled engine, with advanced electronic engine management was rolled out on Monday, 17 May 2010, at Virginia Airport, Durban, where it powered a South African designed, all-composite SA Ravin 500 light aircraft, which in turn was fitted with another local innovation, the state-of-the art ‘glass cockpit’ digital avionics suite from MGL Avionics.

It boasts the lowest lead, nitrous oxide (NOx) and carbon dioxide (CO2) emissions and noise levels, which sets it apart from existing technology and benchmarks new standards in the GA industry.

At an installed weight of 158 kilograms, it is roughly 30% lighter than traditional piston engines of comparable horsepower and offers fuel efficiencies of up to 30% better than conventional GA powerplants.

“Our technology benchmarks South Africa against the finest aviation engineering in the world,” says Andre Schoeman, Chairman of ADEPT.

The architecture of the 320T’s compact engine is entirely different from that of traditional general aviation engines. It is a 120-degree V6 engine, which is dimensionally short, ensuring high levels of strength, durability and smoothness. As a result, it is well balanced, reducing vibration and materials fatigue. In addition, the 320T drives its constant speed propeller through a speed reduction unit, which allows the engine to rev higher, increasing both engine efficiency and providing optimum propeller efficiency.

From the cradle-to-the-grave, the 320T is the most environmentally friendly engine in world general aviation.

Upstream in the manufacturing chain, ADEPT used a Digital Prototyping design process that enabled it to use digital design data contained in 3D models from concept to final component. A full suite of hard tooling now exists for commercial production.

The emission free foundry process used in the production of engine castings is the first in South Africa, and has only recently been introduced by a major European automobile manufacturer. The process is the result of a technology collaboration between ADEPT and the German company Ashland Sud-Chemie. ADEPT further contains its carbon footprint with the use of recyclable materials in its manufacturing process.

Since 2005, UK based AgustaWestland Helicopters has provided significant support and continues to fund ADEPT’s certification process through the European Aviation and Safety Agency (EASA).

In 2007, the Department of Science and Technology’s (DST) Innovation Fund invested R10.5m to fund the company to a pre-production stage. ADEPT is now in discussion with DST’s Technology Innovation Agency and Trade and Investment KZN for funding to ramp up to full production.

South Africa’s role in the Aerospace industry is widely acknowledged…

We are packing for Oshkosh 2021

ADEPT is getting ready to participate at EAA Airventure 2021…